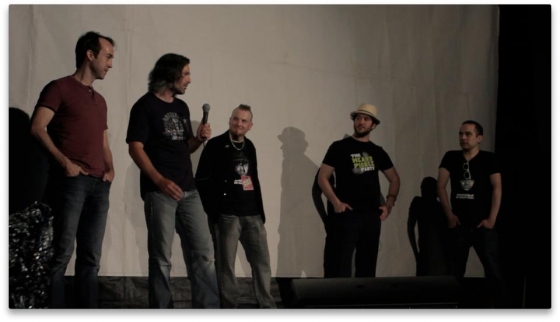 It's been four years since we first heard of Android Re-Enactment which then just started pre-production. Now, 2012, the film is finally ready to be shown to the public! How would you summarize this period?

I see it as a great learning period. The biggest lesson as a filmmaker was to see it in front of an audience, instantly I could tell what works and what didn't. I learnt more in the ninety-odd minutes screening the movie for an audience than I did throughout the whole journey of making Android. Other things I learnt just by doing, sometimes failing but sometimes achieving. Luckily we could take the time to get the movie the way we wanted to before releasing it.

Would you describe these past few years as pleasant or do you consider it a rather difficult and hard time frame?

It was a mixture of all these things.  I made some great friendships along the way and had a lot of great times. I am so happy to be a part of this great team of talented people helping me. I don't like to dwell on the negative too much because it changes nothing, but yeah there definitely were hard moments! However, in those moments I always learnt something and the less fun challenges made it more rewarding to get to the goal.

It's a bold choice making your debut with a sci-fi movie, what were your reasons to tackle this genre?

The first reason was budget! Haha. I thought it would be a good way to keep the cast small and affordable if I could kill the same characters multiple times in one story, so that's where the robot ideas came from. Ironically it was a lot of work in a different way, for instance the production design proved to be quite demanding.

Android felt like, with all due respect, a lighter version of a David Cronenberg movie. Was he a source of inspiration?

Absolutely. I'm very happy you can see that influence! I love Cronenberg and the tone of his work was very much a big influence, I just love his balance of realism and strangeness, and I would say he is the number one influence on our film. But we also have many nods to a lot of our other favourite filmmakers in there. Can you spot them?

During the first part of the movie, because of the many references to the creating life plot, you feel like you're watching a familiar Frankenstein-type story. But then the focus gets shifted towards the human feelings of the rejected scientist and his humiliations. Was it a deliberate choice injecting Android Re-Enactment with a love affair to attract a wider audience?

My intention was actually not to make something commercial but to tell the truth about how Ermus (the scientist) would feel. I wanted to walk a fine line where he is both the hero and the villain of the story. Because his passion for Candy is so strong, he is able to go to very dark places within the same spectrum of love. I think there is good and evil in everyone, and in a way we're all characters in our own movies. I think it's wrong to only show just the good or just the bad in any person. This movie is about wish fulfilment and as people we're inherently selfish. Though we can make good or bad choices, I wanted to be honest about what a frustrated guy like Ermus could and would do if he had those resources.

As I was watching the movie I noticed a lot of different emotions such as drama, slight horror and some kind of dark humor. While this seems like a brilliant idea on paper, a lot of movies couldn't successfully translate this onto the big screen. Android Re-Enactment succeeded brilliantly in my humble opinion. How happy were you when you saw the finished version for the very first time?

That's great to hear! It's a delicate balance and I feel some mixes worked better than others. However, I am really happy with the overall tone of the film and for this I really have to credit the actors for connecting with the material so well. Jeff Sinasac (who plays Ermus) has an amazing ability to keep this really crazy and unstable character grounded in vulnerable emotions, that I feel makes his character relatable. Also both our composer Dave Coleman and cinematographer Kevin Davidson did great work helping to balance the extremes into the same tonal spectrum with their unique talents. 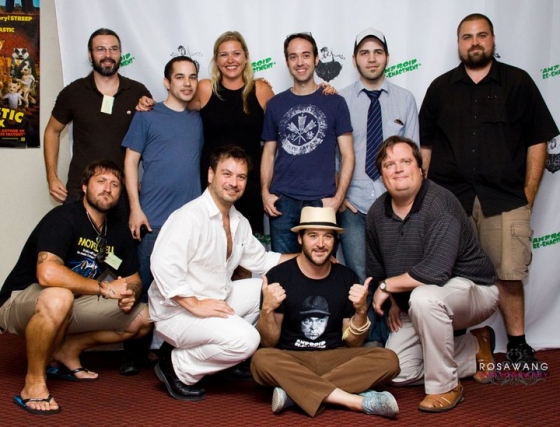 The first scenes were shot in 2008 but the finished product was released just now. What happened in that time-period? Was it just a case of achieving perfection as a director and writer or were there other reasons involved?

Well, we shot the bulk of it in the summer of 2008 with a lot of special FX and reshoots in 2009. After that, it was a lot of waiting to fine-tune the elements and find people who would work for cheap or free. We really had a tiny budget and what I started telling people is that, at our level, time was our budget. We didn't have the money to get immediate results, or immediate quality for that matter, so we had to wait for things. The downside of it was that camera technology improved a lot since then, and it would have been wonderful to shoot on DSLRs if they were as readily available then as they are now. The upside is we could have some kind of quality control and be very picky about a lot of shots.

The Independent Film label has its share of decent titles and has attracted a lot of people, but I do have some difficulties with the 'Independent' bit especially after they released James Gunn's Super on this label. Do you think Super is a real independent movie and what do you consider being the trademarks of a true independent film?

Well, I feel it's more about budget but I definitely believe Super has an indie spirit: there were choices made in that movie that mainstream commercial movies would never have done, and I applaud them for it. To me, independent films are movies that don't bend to the conventional trends and have a certain amount of moral freedom that you wouldn't expect from a studio release. I don't want to generalize though, there are so many exceptions to the rule. My ultimate dream would be to make huge blockbuster movies with the same subversive spirit; I think Fight Club accomplished that.

As we know, spending the right amount of money and time to market a film is really important nowadays. How difficult is it to end up in the festival circuit or to get your DVD in stores?

I think it's a matter of knowledge and that, with what I’ve learnt from this experience, our next movie will be more marketable. But there's so many intangibles too, you’d go crazy if you think too much about it. I think it's just a matter of numbers and impressions and finding an audience. Android is a strange mix of genres, so maybe it's harder to peg down as it might not be so hardcore in any one genre, but lightly splitting into drama, satire, horror and sci-fi. It's probably more satire than sci-fi and we didn't find any satire festivals! I am very grateful for this interview with you and the Frog Bros. website as a whole, as we don't have the ad dollars to really pimp it out. We have a few things coming out soon though, will keep you posted! This flick will have to spread one person at a time and our success is really dependent on the people who want to see it, or that liked it, spreading the word. So if anyone reading this is interested, you can surely make a difference and we'll be more than happy to make you more movies to watch!

Your movie will probably end up in my personal top 15 of 2012 but if there would be a contest for best art work, you'd win the main prize hands down. Who came up with the kick-ass poster and DVD cover? What can or should I do to get one of these posters?

Thank you, thank you and wow, thanks! The poster was painted by a talented artist named Katie Webb. It was based on my concept but I'd be a liar if I didn't say we tweaked it a lot, so it was really a team effort of my producers (Adam Buller and Steve Walsh) and friends to find the right balance and Katie's awesome talent ofcourse. We sell them at screenings but I hope to put up a merchandise section on our website soon.

Knowing there is an Android Re-Enactment DVD-release, is it wrong to say that your work on this film is done? What does the future hold?

Technically we are still on our festival run and looking for a great distributor who likes cult type films! So it's so important for us to continue to connect with our audience. We have a video game in development for almost a year now, so we hope the game and the movie will market each other. Currently we're in pre-production on two very fucked up short films that we plan to begin filming this summer.

An Android Re-Enactment game sounds like a lot of fun so feel free to share any information possible!

It’s called ANDROID PANIC: The Android Re-Enactment Movie Game and is a multi-genre action platformer influenced by Super Nintendo, 90’s arcade games and the Japanese gaming spirit. It’s not entirely old-school though; we’ve infused it with some newer concepts such as cover-shooting. It’s being produced by my co-producer Adam Buller and the gameplay which I’ve designed is translated by an amazing programmer called Rhys Simpson and visualized by awesome pixel artist Dave Knox. Dave Coleman, who composed the music for the movie, has adapted his score into Chip-tunes for a true SNES style experience! We expect the game to be done this Fall and are developing it for iPhone, Steam and maybe Ouya which is an open source console. 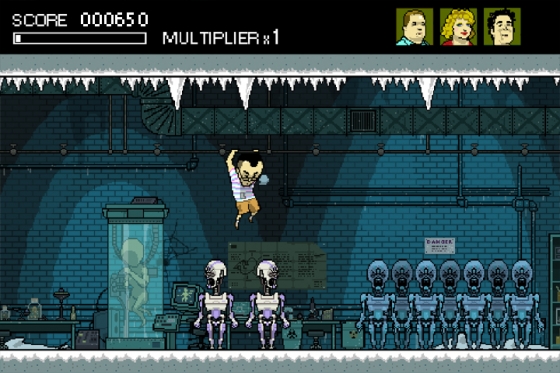 While 2012 is coming to an end, we Belgians still have one film festival to attend called Razor Reel. What was your ultimate festival movie this year and why?

Well, since my home is in Toronto I've always been a Toronto International Film Festival Midnight Madness guy! I really look forward to seeing some crazy world cinema this September! I also very much enjoy Toronto After Dark and if you or your friends are in the area in the fall, be sure to check out both! Great for genre films!

The entire Frog Bros. team wish to thank Darryl Shaw for taking the time to answer our questions!
If you want to keep track of everything related to Android Re-Enactment, head on over to their Facebook group!
Tweet
Plaats uw reactie